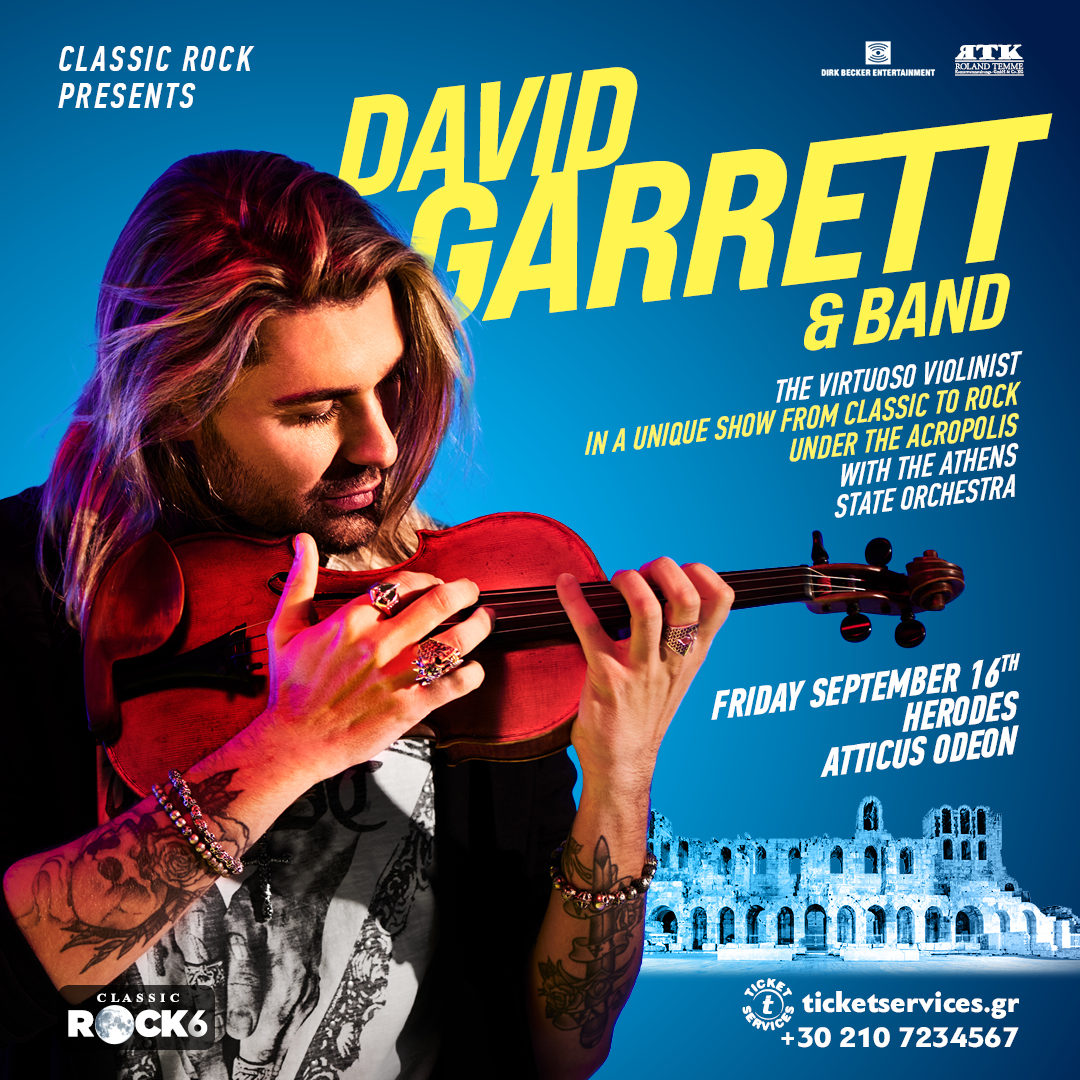 The Paganini of our times, who dominates the pop-rock scene exciting millions of spectators around the world, comes to Greece for the first time with his electric band, in collaboration with the Athens State Orchestra  for Classic Rock 6.

After five consecutive years of Sold out, Classic Rock 6 comes back in September with an explosive artist! The one of a kind, virtuoso violinist and master of crossovers, David Garrett!

He will be accompanied by the State Orchestra of Athens.

On Friday, September 16, 2022, in the ODEON OF HERODES ATTICUS, we will experience the “ultimate” musical experience, at the most important artistic event of the summer!

The international superstar violinist, who crosses over Mozart and Metallica, will captivate the audience with his unique hits and explosive temperament. The so-called “devil of the violin”, the virtuoso of the 21st century, has established himself as one of the most important artists on the pop/rock scene worldwide.

His mind-blowing performances of rock hits like “Purple Rain” and “Smells Like Teen Spirit”, his incredibly beautiful versions of anthems like “Nothing Else Matters” and “November Rain”, his unique performances of pop hits like “ Viva la vida’ and ‘Hey Jude’, as well as his mesmerizing arrangements of classical tunes such as Beethoven’s ‘5th Symphony’ and Debussy’s ‘Clair de Lune’, have created a huge worldwide audience attached to his music .

DAVID GARRETT
He was born in 1980 in Aachen, Germany. He took his first steps on the violin at the age of 4, DAVID GARRETT has performed the most complex classical compositions with leading conductors and orchestras around the world. His extraordinary, versatile talent was spotted early on. Garrett made his stage debut at the age of 10 and at 13 became the youngest artist ever signed to the prestigious Deutsche Gramophone. At the age of just 15 he recorded Paganini’s 24 Caprices, undoubtedly one of the most difficult pieces ever written for the violin.

He studied at the Juilliard School in New York, where he became a student of Itzhak Perlman, consolidating his already indisputable position in the field of classical music.
He soon stood out and established himself as a pioneer in crossovers, as an international superstar who “treads” on the border between Mozart and Metallica. Beginning with the release of “Free” in 2006, DAVID GARRETT achieved unprecedented success, gaining millions of fans around the world. It has won 25 gold and 17 platinum awards, creating a whole new audience for crossover as well as classical music, converting the violin to a… rock instrument.
He collaborates with conductors of the classical field such as Zubin Mehta, Yehudi Menuhin, Christoph Eschenbach, Riccardo Chailly and Andrés Orozco-Estrada. Menuhin described him as “the greatest violinist of his generation”. He gives concerts playing with some of the world’s most distinguished orchestras, such as the Vienna Symphony Orchestra, the London Philharmonic Orchestra, the Filharmonica della Scala, the RAI Turin, the Academia di Santa Cecilia and the Israel Philharmonic Orchestra.